Skywarp is one of Megatron’s elite Seekers. He alone has the unique ability to teleport short distances. Fortunately for the Autobots, Skywarp isn’t that sharp and rarely uses his ability tactically in battle, unless specifically ordered to do so. More often than not, Skywarp uses his abilities to prank or humiliate his opponents rather than outright destroy them.

In the G1 cartoon, Skywarp was also voiced by the legendary Frank Welker, along with Megatron and Soundwave.

Fracas was originally Scourge’s Targetmaster. I guess they decided to release him to compliment the Titans Return Scourge? Not even the Takara Legends got a Targetmaster Fracas (he was a Titan Master/ Headmaster for Scourge in previous release). He is a straight redeco of Firedrive. Fracas is hot-tempered and prone to violent outbursts.

His weapon can be removed from his back and attached to his arm.

Hairsplitter was originally partnered with Spinster and Singe. Previously a pencil-pushing bureaucrat back on Nebulos, Hairsplitter does everything in fine detail, annoying his co-workers and presumably his new “partners” as well.

The figure is a redeco of Battle Master Aimless. 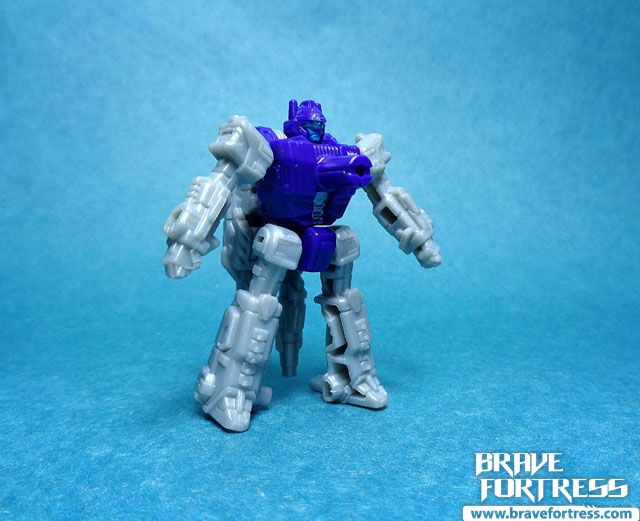 His weapon can be removed from his back and attached to his arm.

So I guess this means Skywarp’s a Dual Targetmaster, too, now?

Not much is known about this character, other than that he functions as the spy for the Phantomstrike unit. The toy is a redeco of Pteraxadon.

Compared to what came with the Alphastrike Counterforce Autobot set, this set is a real letdown, especially given the high SRP price for just one Voyager class and three Battle Masters? If it wasn’t for Skywarp, I would’ve probably skipped this set.

A big, big thanks to my buddy Erik for helping me get this set out of Amazon Canada at SRP. It sold out fast everywhere and became hard to find, with prices on secondary markets going crazy.