Arrogant, thick-headed, yet brave and courageous, the commander of the Dinobots is one of the strongest Autobots around, almost on par with Optimus Prime. Simple-minded and short-tempered like the rest of the Dinobots, he has trouble dealing with authority.

For some reason, Hasbro decided to make his clear chest piece dark? I know it’s an homage to the original toy, but I don’t think it was this dark?? Good thing the piece is easily removed by removing two screws on the back of the chest.

Ugh.. this guy.. the only really annoying part of the 1986 movie, he made groan every time he was onscreen for Seasons 3 and 4 of the series too. One of the worst characters ever included in the original cartoons.

Thanks to a hole on Grimlock’s shoulders, captain annoying can be posted up on him. 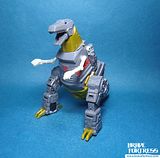 The inside of his mouth has a post, I guess for attaching blast effects parts?

The Galaxial Rocket Launcher can be mounted on the back of the dino mode.

I wasn’t expecting the dino mode to be small.

Thanks to a peg hole on Grimlock’s dino neck, you can mount the “greatest Autobot evah” on him in dino mode too. Yay….

Overall, dang if this isn’t the best modern G1 Grimlock figure outside of the Masterpiece line! Simply a must have. I hope the other Dinobots are just as big and screen accurate when they roll them out (eventually).