Slag is the meanest, the most violent and least-liked member of the Dinobots. He would often pick fights with anyone over anything, even his fellow Autobots! It’s a surprise he isn’t one of the Decepticons. His rotten attitude often results in the other Autobot’s reluctance to help him when he’s in trouble.

Spike Witwicky’s son, in the cartoons, he becomes the new “child identification character” after Spike grows up due to the time jump.

Similar to Wheelie that came with Grimlock, Daniel does not transform and only has very limited articulation. He, uh, also kinda lacks a face…

Daniel can also ride onto Slag’s left shoulder. Though it’s highly doubtful this will ever happen in continuity. Slag would probably bite Daniel than let him ride like that.

Daniel can also ride on Slag’s Dino mode as well. 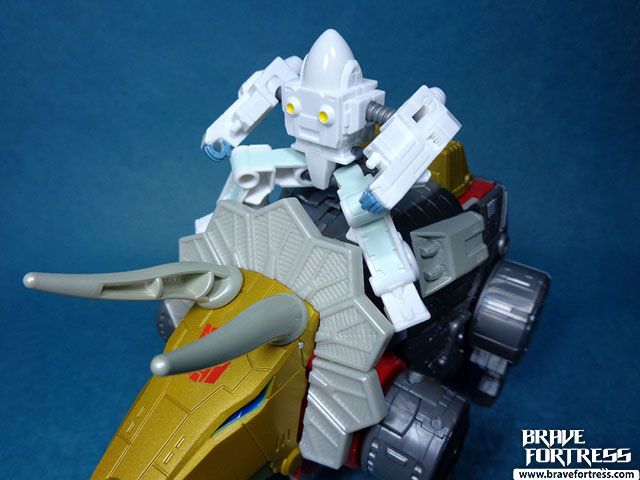 Overall, an excellent set. This is by far the best Slag we’ve ever gotten in any TF toyline. It’s big, it’s cartoon-accurate and is amazing to handle. I just wish the set came with his Electro Sword and that his horns were solid plastic instead of having visible hollow areas. The Daniel figure is a bit of a let down though, aside from very limited articulation, the lack of a face to see under the dome is very awkward to look at, hopefully, Hasbro will release a solo figure for Daniel so that we can forget this accessory ever happened.