Brain Robo – Brain of Courage (yes, that is his name in this mode).

Called the “Brain of Courage”, he is the leader of the Brainmasters and the Galactic Defense Forces Sector One Unit.

Brainmasters are actually the reverse of Headmasters, whereby a full sized-Transformer transfers its consciousness into a small Micromaster Transtector body. An unexpected side-effect of this transfer grants them “Brain Power”, which greatly boosts their courage, strength, skill and intelligence stats. 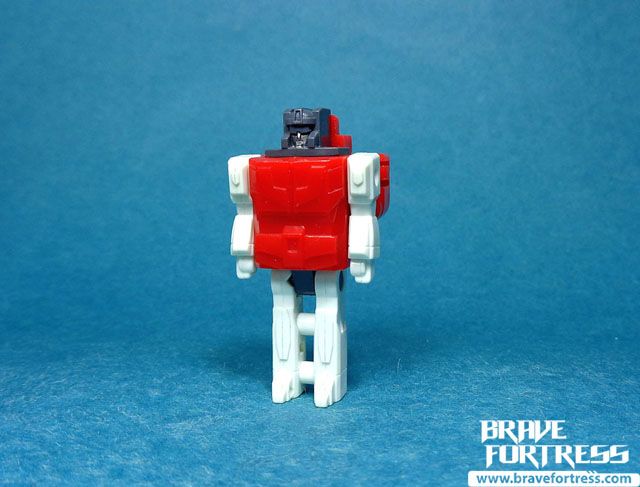 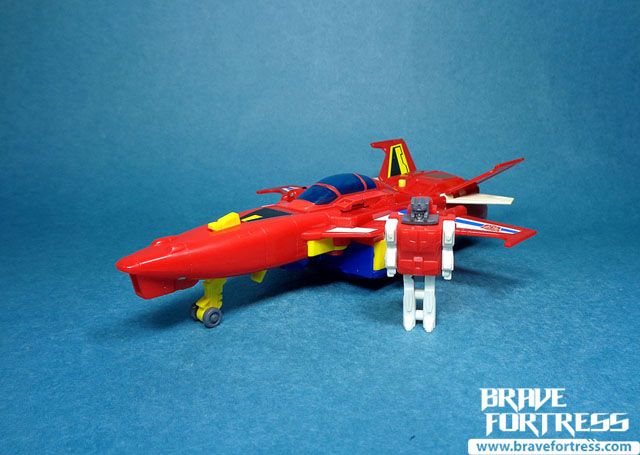 Brain of Courage can ride inside the c0ckpit.

Closing the chest piece pushes the figure’s face up into the helmet.

Saber is Star Saber’s regular robot mode when he isn’t combined with the V-Star unit. 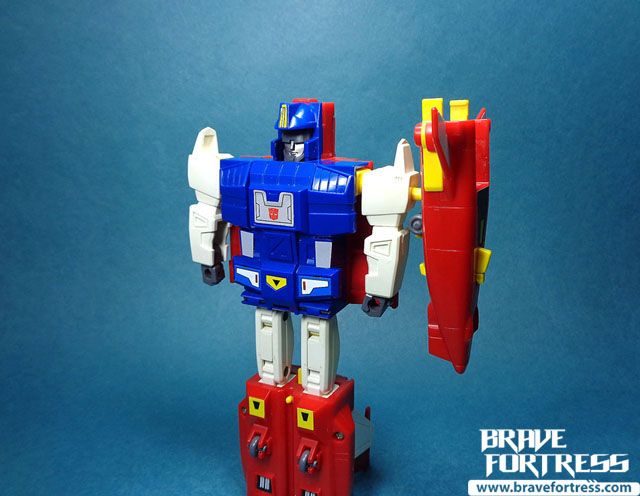 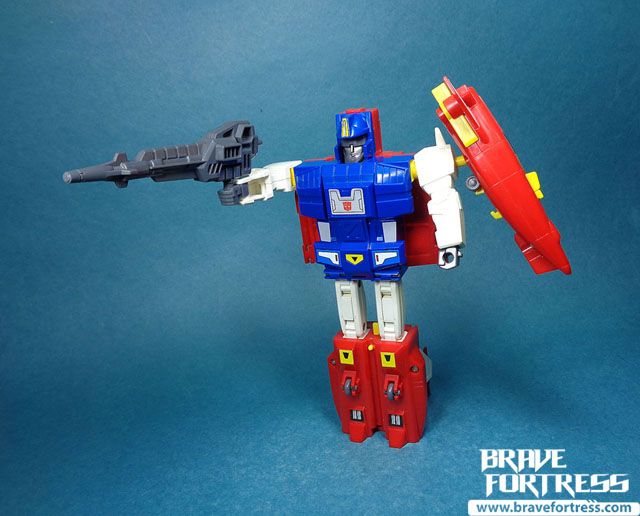 Star Saber’s weapons can be stored on the V-Star

Saber in jet mode can combine with the V-Star.

The V-Star can transform into a battle station for Saber and the other Autobots to man. 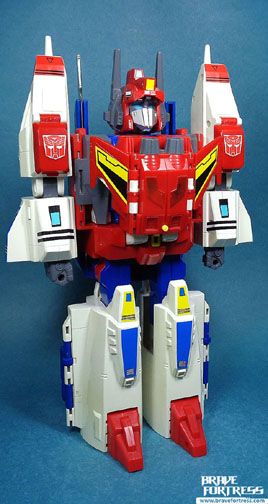 Star Saber is the Supreme Commander of the Autobots in the year 2025, succeeding God Ginrai. This title also makes him the head of the Galactic Peace Alliance’s Galactic Defense Force. Famed as the “greatest swordsman in the universe”, Star Saber burns with a strong sense of justice and strives to end the threat of the evil Decepticons once and for all. 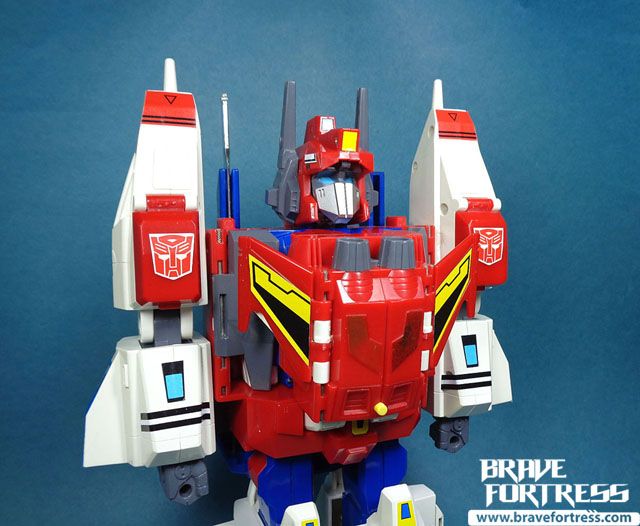 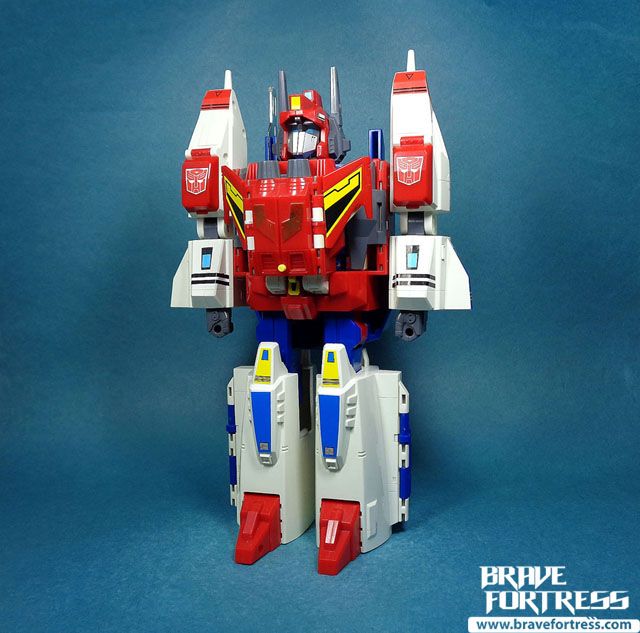 One of the problems with this toy is that the spring for the faceplate in the helmet tends to become tough over time, making the faceplate unable to descend properly unless constantly pressed down.

Star Saber can equip his Saber Laser rifle from the smaller figure. 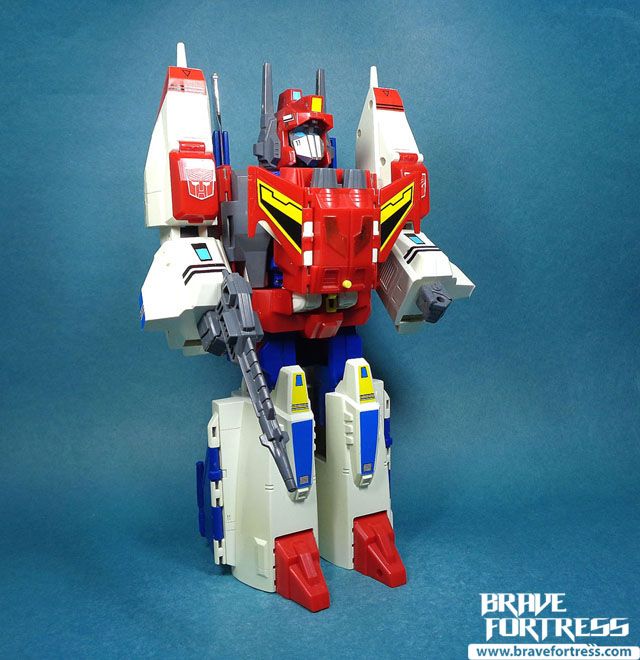 Star Saber’s hands can rotate, giving you some freedom to hold the Saber Blade at different angles.

In the series, sometimes outside of battle, Star Saber goes around with his helmet stored back. 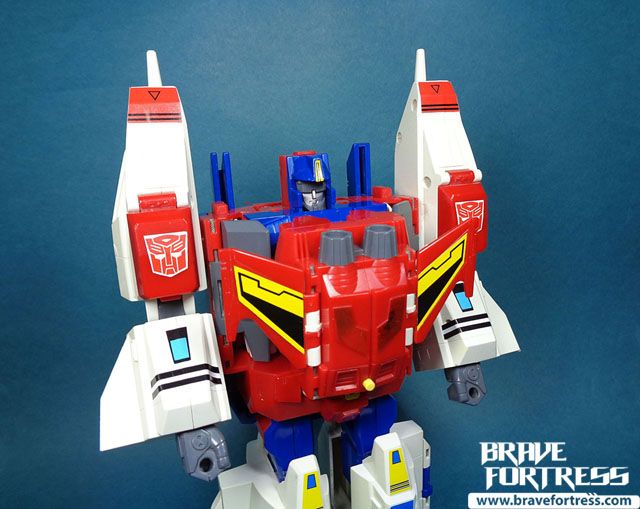 After God Ginrai became fatally injured from Deathsaurus’ Living-Metal-Destroying Cannon, he opts to undergo a reconstruction process that would allow him to combine with Star Saber, at the risk of losing his original personality. The mighty Autobot Victory Leo is then born!

With the V-Lock Rifles mounted on his back, Victory Leo stands roughly 13 inches tall.

The V-Lock Cannon is supposed to come with three missiles for it, but unfortunately, my auction-won set doesn’t have them.

The V-Lock Rifles can be mounted on his forearms.

Both Star Saber and Victory Leo can combine their flight modes

The combined form of Star Saber and Victory Leo, Victory Saber is the most powerful Autobot thus far. Star Saber’s speed and power are greatly augmented thanks to Victory Leo. However, an unfortunate side effect of this combination results in Star Saber being more savage and less focused because of beinf fused Victory Leo’s violent personality. 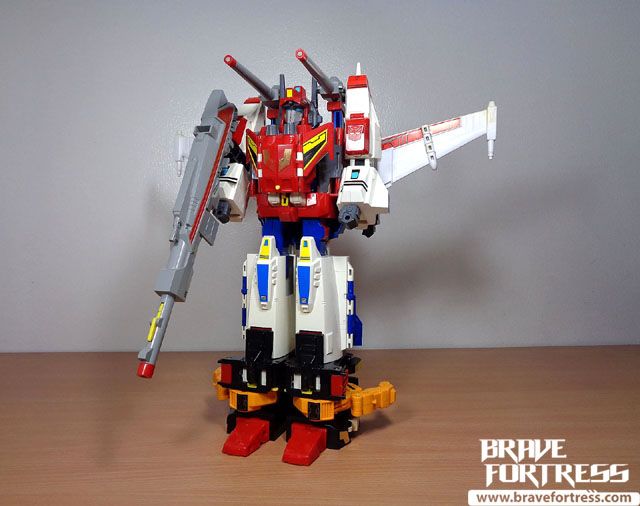 Victory Leo is reduced to a backpack and “platform” shoes in this mode. Lol..

The backpack clips onto Star Saber’s shoulders and underside and backside.

Sigh.. the seller of this set forgot to mention one of the locking clips for the feet is completely broken off… bummer.

The V-Lock Cannon clips onto Star Saber’s bicep in this form.

Victory Saber looks really big and impressive in this mode.

Overall, despite the undeclared broken locking clip for one of the feet, I’m still really happy with this set. It’s definitely one of the better Japanese G1 vintage Transformers that predates the Brave Series. I was really lucky to score this duo at a really great price on auction thanks to a good friend (you know who you are).

Now to hope I can score a good deal on a vintage Dai Atlas to wrap up the last of the original Autobot Commanders.