Plastic sheets are included for preventing paint rubs on the dorsal fins of the jet and on the antennae of the Battroid.

Beautiful details printed all over this unit! I really wonder how they do it in so minute details?

A Hikaru Ichijo pilot figure included. His flight suit’s appearance is based on the “Do You Remember Love” movie. It doesn’t feature any articulation though.

He fits perfectly in place.

His hands are designed that they grip perfectly onto the controls in the c0ckpit.

If you’re having difficulty plugging Hikaru in place, you can opt to just pull out the whole instrument panel and then reset the pieces. Personally, I find it more difficult to put the panel back in when Hikaru is already seated down.

The landing gears are all made of diecast metal, with rubber wheels.

Annoyingly though, there isn’t a locking mechanism in place for the landing gears. One of the rear landing gears on mine tends to collapse down rather easily. Anyone else having problems with this?

The plane mode also features moving wing flaps and even an airbrake! Impressive!

To lift up the airbrake, just pick at the notches sides, instead of at the tip of the airbrake.

An optional antennae piece is included (there’s a spare piece included in the tray) for plugging into the Gerwalk’s backpack. You have to plug it in manually though, no “perfect transformation” for the antennae in this scenario.

The GU-11 Gunpod. In Macross lore, the original GU-11 Gunpod rotary cannon is capable of firing 1200 rounds per minute, however, it’s ammo capacity is only 200 rounds.

The Gunpod comes with a attachable sling. Hopefully, the tiny plastic pegs won’t break one day, but they do seem durable and plugging them into the slots isn’t hard, so breakage does seem unlikely.

The Gunpod can be plugged onto the peg on the articulated hand, or just plugged directly into the alternate “index-finger pointing” hand’s slot.

The Gunpod can also be mounted on the sides of the forearms.

The VF-1S, Hikaru Ichijo’s final unit used in the end battle of “Macross: Do You Remember Love” movie. The VF-1S originally belonged to his “big brother” Roy Fokker. Just like in the TV series, Hikaru was promoted and given higher grade, more advanced “Commander” unit after Roy’s passing. 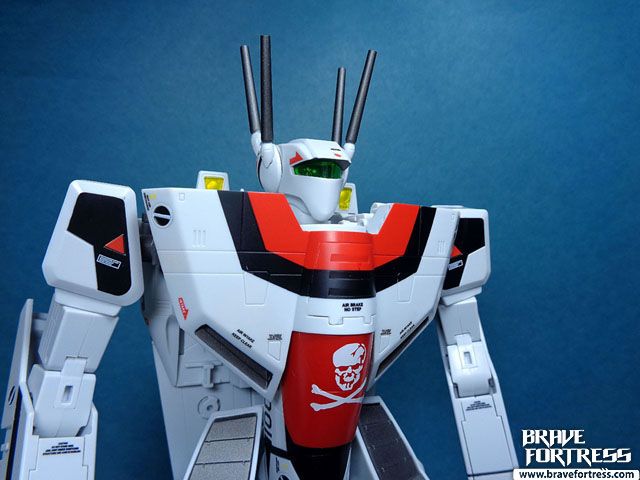 I have to say, I was quite shocked to discover Bandai went with plastic for this joint?? I remember breaking this section on my old vintage non-DX Macross VF-1J when I was a kid. I really hope the plastic they used here is durable. The original DX Valkyries had diecast metal for this section due to the nature of the mechanical stress for this area.

Do note that the upper half of ship can be disassembled from the legs. I didn’t realize this a thing and was lucky the lower half landed on my lap and not on the floor. This design was done so that the Battroid can rotate it’s waist.

Originally, the concept here is that the lock is supposed to be super tight, and you would need this tool to pick the clasp open.

But in my case, the clasp isn’t really that tight and it can split open with just a little flick of my finger. I guess it’s not a bad thing (as opposed to it being insanely tight), one just has to be mindful of what to expect when transforming the toy, to avoid accidents. Personally, I would’ve preferred they included a spudger tool for picking open the panels for the landing gears, those are a real pain to open.

If you do decide to disengage the “spinal column”, make sure to lock the clasp into place, this will prevent wobbling of the hips on the figure in robot mode.

To make it show accurate, you have to equip the vent covers for the turbines in Battroid mode. No perfect transformation here either, sadly.

Equipping the “fillers” for the sides of the mech is a must, otherwise, the gaps look really bad when viewed from the sides.

While not absolutely necessary, attaching this piece into the base of the neck helps hold the back of the toy in position. I found this to be optional though.

When transforming back into Valkyrie mode, this is how the piece is supposed to be folded back in.

Tricky hip piece
When transforming to Battroid mode, make sure the inner thigh joints are rotated to this position, for maximum range of motion for the hips.

When returning to Valkyrie mode, this is how those same pieces are supposed to be oriented to fit back into place. I’m not really sure why Bandai decided to go this route for this, as they are a bit tricky to figure out and I don’t see the point? Why have them there at all? To hide the bars for the hips? Very strange design choice.

Too bad the feet don’t have much ankle tilt. 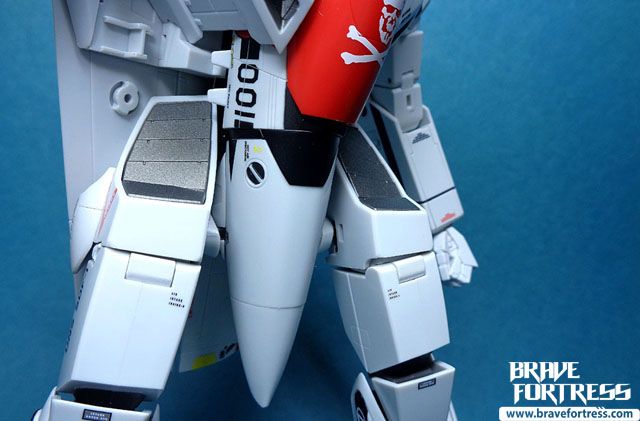 Watch out for these flaps, they tend to get flipped around easily, so if you’re not aware, they might get posed wrong (especially when trying to take photos), not really a major issue but it can get annoying. Also, the whole assembly can be removed (white plastic pin + flap), so be careful not to lose them.

Be careful not to snag the adjustable wing flaps on this hinge, it happened several times to me when the flaps aren’t flush when you close them down for Battroid mode.

Just like with the other Chogokin Macross figures, the display base can be reconfigured based on whichever mode you plan to display the toy in.

This is how the attachment piece is supposed to look when you place it in right for Valkyrie mode, the instructions were a bit unclear with it came to this.

Gerwalk mode configuration for the display base.

This is how the attachment piece is supposed to look when you place it in right for Gerwalk mode.

… And finally, this is how the attachment piece is supposed to look when you place it in right for Battroid mode.

Diecast parts include:
–Sections of the shoulder joint
–Robot’s “Spine”
–Hip joint axel
–A small section of the thigh joints where the legs can lift up
–Knees
–Feet


Overall, pretty decent. I like the painted decal details on toy (probably it’s best selling point), but in a lot of ways, it does only feel like an upsized Hi-Metal R figure. The lack of ratchet joints for the arms and overall low diecast presence is a bit of a downer for me, while the transformation engineering is nothing really new (we’ve already seen more of the same from the Hi-Metal R Valks). For what I paid for this figure (it costs more than most complex and heavy Soul of Chogokin combiner figures), I guess was really hoping for more. Still, it’s a beautiful looking piece and is very eye-catching when displayed on a shelf. If you’re a Macross fan, this piece is a must-have!

Admittedly, though, I’ll be skipping on the other variations of this DX toy (VF-1J, VF-1J Max, VF-1A Kakizaki, VF-1S Fokker, VF-1D), since at the end of the day, this guy is the only one you’ll really need.