There’s an inner box, which opens up through the sides like a matchbox.

While the Woody Robo set comes with a storybook, we only get a separate manual for the Gangreat King.

The set comes with a pick, so you can open some of the covers easier. I find it wasn’t necessary to use it though.

(From the story book bio that came with Woody Robo Sheriff Star)
Space Ranger Buzz Lightyear’s main mission is to protect the galaxy. Always on the lookout for suspicious activity, he is constantly surveying the landscape from inside of the robot.

As cool as it is to have a diecast Buzz Lightyear figure, this one does not have elbow joints (while Woody didn’t come with knee joints).

Buzz’s wings can be retracted a bit.

To infinity and beyond!

While they don’t look like much, these guys are actually heavy to hold.

(From the story book bio that came with Woody Robo Sheriff Star)
Similar but different, Alien 1 and Alien 2 form the left and right arms of Buzz the Space Ranger Robo. Their signature attack, “Space Freeze Beam”, never fails to escape any sticky situation.

(From the story book bio that came with Woody Robo Sheriff Star)
Forming the chest and legs, the versatile Space Shuttle is at the core of the robot. With powerful jet thrusters and a rear mounted rocket, it is an essential element for the success of all galactic missions. 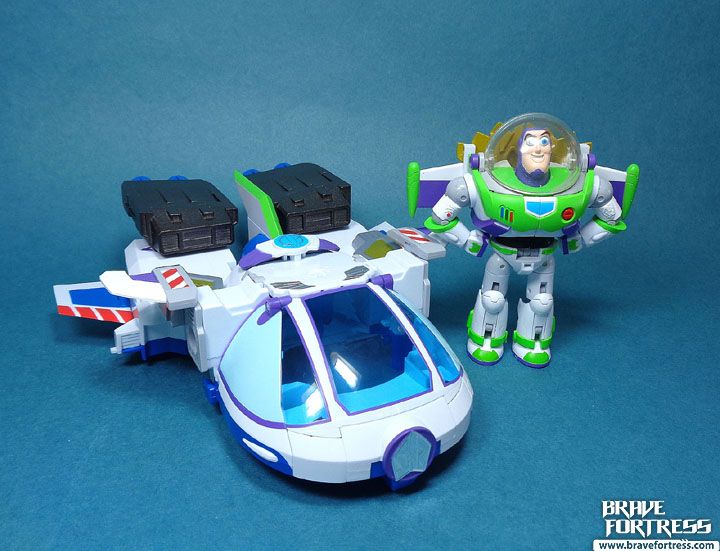 Buzz’s “utility belt” can be equipped on the Shuttle (it actually comes packaged on the shuttle and not on Buzz).

“The Big One” rocket. It comes with a sticker sheet for labeling the rocket, but I opted not to use it.

Rocket can be attached either on the shuttle or directly on Buzz.

I like this figure waaaay better than the Woody Robo Sheriff Star. It’s more sold, lots more shelf presence and it reminds me of the old vintage Popy Super Sentai base ships. I really liked this toy.

Yeah, that’s creepy to look at….

Diecast parts include
-Buzz-legs and joints
-Aliens-Anything painted blue, except for the forearms
-Space Shuttle-Boosters, sections of the front of the ship

Overall, this beats the Woody Robo Sheriff Star by a mile. The connections are easier. No loose connections, really super heavy, and is nicer and more symmetrical to look at. Again, this was a part of a discount package in order to buy Soul of Chogokin Full Action Voltes V in my part of the world. It’s very nice and I probably would’ve picked this up at SRP (unlike the Woody Robo) if I had spare funds at the time of its initial release.