Mattel got REALLY lazy here and didn’t even bother to write up individual bios for each character. They just slapped the same text on all the packages (except for the Walmart Exclusives).

Mattel’s sculpting department really needs to up their game, this figure looks almost nothing like Henry Cavill. Now, if they were aiming to make a Mark Dacascos as Superman figure, this would be impressive… lol..

I’m not 100% sure, but I think they reused some of the torso parts from the Man of Steel movie figure. The legs are still the same though, still no “rocker” ankles. Tsk.

Back in BVS, Mattel released this version of “soft goods” caped Batman as an SDCC exclusive. I am so happy I wasn’t able to get one back then at ridiculous prices. This version seems a bit better than the SDCC 2 pack I think. The only way to get this guy was through Walmart (or Ebay and Amazon resellers).

The cape features a “leather”-like texture. I hope it doesn’t flake or peel off over time.

The Walmart exclusives (Batman and Cyborg) come with the 3 Mother Boxes. Each figure comes with half of a box for some reason. Build-a-box? Seriously?

The figure itself is pretty cool. I do find the proportions a bit off though. They went too big with the upper body and then left the legs too short. Making Batman look a bit too stocky.

The elbow articulation is hindered because of the gauntlet design.

Sadly, Batman does not come with any weapons. Not even a single Batarang. C’mon Mattel….

The World’s Finest? After BVS, I’m not sure anymore (At least as far as the DCEU is concerned). Thanks Zack Snyder (sarcasm).

Cyborg in the movie felt like the “token black guy” in the group. I know DC is trying to mix it up by adding Victor Stone to the lineup, but it feels wrong, he’s a Titan. They should’ve just given us John Stewart Green Lantern instead if they wanted a black hero to fill out the ranks.

Supposedly, in the Zack Snyder draft of the movie, Cyborg was supposed to die in the finale while stopping the Mother Box. Glad that didn’t come to pass in the final cut. The DCEU doesn’t need more depressing moments.

Vic comes with an alternate “blaster” arm. I find it easier to equip this on his right arm than on his left.

Aquaman is ironically the coolest-looking figure in the series. He looks quite spot on to how he looked in the movie. The Atlantean armor details are also very nice. Sadly, his head articulation is a bit limited due to the hair and beard.

Who’s finally getting a solo movie? This dude!

From what I understand, there was supposed to be a whole scene of how Arthur gets his garb and the trident from Atlantis. With William Dafoe playing the role of Vulko. Unfortunately, the scene was shot but cut out due to time constrains.

Flash was one of the bright spots of the movie, since he brought some humor to the otherwise dark and DCEU. But I really hate the costume design. Armor plates? Geez…

Not sure what’s up with these white lines, I think they’re supposed to represent the “Speed Force”? Terrible design idea IMHO. It’s not like he’s always got the “Speed Force” active even when he’s just standing around.
(Edit: Turns out the lines are actually part of the costume, they serve as wires which hold the armor together. Credits to Miguel Luis Gomez Pigao for the headsup. )

The good news is that this figure does hold a running pose well.

There’s a two-pack version of this figure with a Barry Allen head and comic version Flash (reissue of the DC Universe Classics Flash), but that figure lacked the black paint application details on the body, so I passed on it.

For me, Flash was okay up until close to the end credits. The way he as running in the final sequence was very awkward, I wish they made him look like he was running like a Marathon sprinter, as opposed to… whatever that was.

Now, admittedly, I didn’t like the toyline enough to buy the “tactical suit” Batman (I went with the Walmart “normal suit” version) and Wonder Woman again, plus the BAF Stepphenwolf looks terrible. So I’ll just stick with these guys.

Here’s the link to the old movie Wonder Woman gallery. 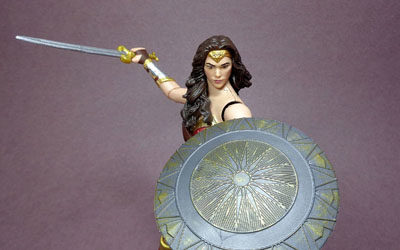 Overall, not bad. They do look great together. But like the movie, the line could’ve been something much more epic.