Zartan is quite an enigma, from being a master of disguise, to a ninja master, to a leader of a biker gang? Quite a strange setup for a character, but I guess that’s part of the charm of the G.i. Joe universe.

Zartan comes with a bow and arrow set for silent kills, one of the arrows on his quiver can be removed.

Knife can be sheathed on his left leg.

Even though he’s aligned with Cobra, Zartan usually does help out the Joes when certain situations demand it (in the Marvel comics and IDW comics anyways).

With Ninja Zartan’s release added to Slice (FSS 3.0 wave 2) and Dice (FSS 1.0 wave 1), this more or less wraps up the Cobra version of the Ninja Force team (missing only Red Ninja, a redeco of Dice, and a newer version of the Night Creeper, based on the classic lineup). 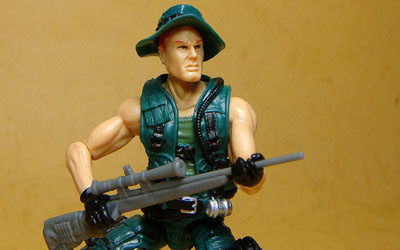 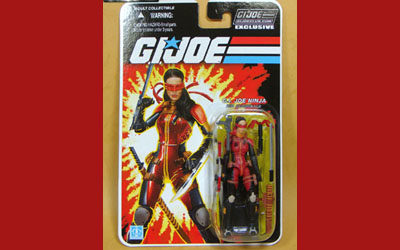 A reuse of the old Pursuit of Cobra Doom Cycle, this version has the same gimmicks, minus the flame thrower and hose accessory in the back.

Pressing down on the gas canister releases the wing blades.

Pressing the button in the center of the handle bars releases the front blades and the hidden shotguns.