Reminds me of the old vintage line’s “Point Dread”, but has a less exciting set up. The plus feature is that it can hook up to Castle Grayskull.

Hehe, this is one playset where the villains actually win at something (collapsing gate, crumbling balcony).

Eyes light up and the castle speaks.

It’s not bad but the voice is really dull, no emotion, no accent, no hallowed castle voice effect. Just a simple, boring, speaking voice. 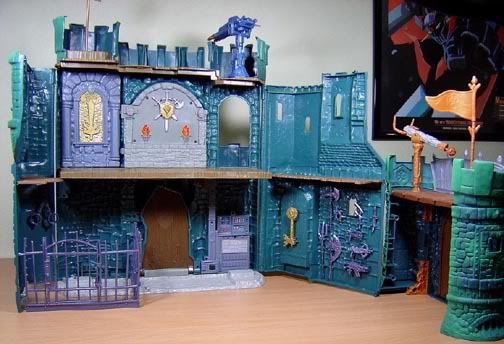 -Originally the castle’s main gimmick was the electronic sensors on the floors which could tell friend from foe inside and outside the castle, thanks to the nifty chip found inside each “MOTU” figure’s right foot.

Unfortunately due to rising costs of making the chip, later waves of the figures were no longer outfitted with them (particularly the ones that came out in Asia).

The Key to Grayskull is used in place of the “chipped” figures. But it only works as a “hero” figure, not as a “villain”, hence the second floor trapdoor gimmick cannot be used.

“Hmm… it’s getting mighty crowded in there.”

The castle walls can be folded up for easy storage.

I passed on the Neca MOTU Staction figures. As detailed as they are, they were too detailed for me. It made the Mattel figures look vastly inferior (plus the price was a bit high for a non-poseable figure, no offense to the folks who love the line. ) so I opted to pass on them except for Sorceress (used as a fixture for the castle).

Funfact 1: Teela is Sorceress’ daughter.
Funfact 2: Man-at-arms and Fisto are brothers.
Funfact 3: Man-at-arms or Fisto could be Teela’s biological father.
Funfact 4: Sy-clone never found his family (thanks to the show’s premature cancellation)
Funfact 5: Snake mountain was originally the home of the Snakemen before Skeletor and his gang moved in and the mountain originally had 3 snake heads.
Funfact 6: King Hiss devoured Zodak’s brother.
Funfact 7: Despite only lasting 2 seasons, the third season(cancelled) would have shown us Skeletor in a showdown versus King Hiss, winning the fight and later having Hordak show up and take over Eternia. With the Masters now on the run as fugitives.
Funfact 8: She-ra would have been introduced in season 3.
.