This set comes with an outer plastic baggie to protect the box.

Usually deployed as the Decepticon’s main spy due to his size, Laserbeak can sneak into the tightest of Autobot security, gain intel and sneak out before anyone realizes. He is also sometimes deployed by Soundwave as an assassin, one time Laserbeak almost suceeded in killing Optimus Prime. At his core though, Laserbeak is a coward, preferring to fly away than take an opponent head on.

Not sure how I feel about the three-toned silver on Corvus’ “backpack”. I think I would’ve preferred everything in chrome instead.

You can flip the hidden camera out his forehead, but to get it up all the way can be tricky as the lock for it is very tight. I didn’t want to force it in case the tiny plastic breaks, so that’s as far as I’m willing to push it on this gimmick.

I really love the added articulation on this figure’s wings. It’s one of the main reasons why I jumped into this set despite already having the official MP versions.

Thanks to the holes in Corvus’ feet, you can easily plug him into the hardpoints on Acoustic Wave’s shoulders and forearms.

Fiercely loyal to Megatron and Soundwave, Ravage hunts from the shadows, eliminating his prey with no mercy. Ravage emits an electromagnetic emission field which helps cloak his presence. His unique abilities and “silent walk” makes him blend into the darkness, easily avoiding detection.

Impressively, unlike the official Masterpiece Ravage, this figure pretty much hides all of the tape mode markings in his beast mode, except for this spot. It’s not perfect, but it’s a huge improvement (all at the cost of making the cassette mode having fewer markings though).

The figure features a moveable jaw.

The main body of the figure and the rockets on its hips are diecast. Making him heavier than Fibrib.

Just like Fibrir, the blasters can be stored into the legs when in tape mode, but I don’t really recommend this as the fit is very tight and you might wind up scratching the figure or accessory, or both.

Wild, impulsive and wants only destruction, Frenzy is as dangerous as they come. In the original Marvel Comics, Frenzy had the ability to generate powerful sonic waves from his torso (Battle Cry), that could mess with electrical systems and cause malfunctions in his targets. This was never shown in the Sunbow cartoons and both humanoid Cassetticons had piledrivers as their special attacks.

His name is a play on the old “Frenzy is Red, Rumble is Blue” acronym (which is the reverse of Fibrir from the main set with Acoustic wave). Basically, just pick whichever name you want to go with. Nicely played Fans Toys, er, Robot Paradise.

His blasters can be removed from his back and equipped onto his hands.

The piledrivers are actually spring loaded (like with Fibrir), untabbing this piece will release the spring lock.

Each Cassetticon can easily fit into Acoustic wave’s chest.

Acoustic wave can fit two cassettes inside him at the same time, just use the lever behind the eject button to push the second tape out. 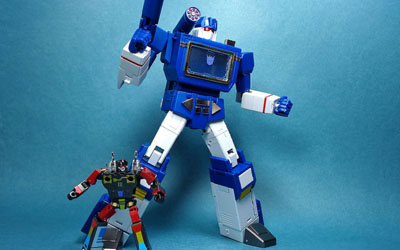 I was planning to do a comparison with the Takara versions, but it turns out I had stored them all the way in the back of the storage room, which would take a loooong time to dig out. I just couldn’t get to them with the little free time I had. Perhaps next time.

Overall, a pretty great upgrade from the original Takara versions, I like the proportions here better and the diecast and paint just make these stand out more than the official releases. These guys are pretty much the whole reason why I caved in and got Acoustic Wave and not the other way around. I think I will most likely use these guys as my “go to” MP figures now instead of the Takara versions.