Note the location of the optional head and faceplate in the tray to avoid losing these pieces.

The manual is a reuse of the previous version (dsiplay stand is still black, not green), but at least the whole manual is in color.

Beautiful etching on the base.

The optional post for holding the Goldion Hammer is still black plastic for some reason (maybe it’s more durable than clear plastic?).

The additional support struts on the sides of the base are still here. Adding more balance to the display base, which is important considering how heavy the overall Star GGG + Goldion Hammer set is.

For holding the Stealth Gao II, a specific attachment piece is used.

To “complete the look” for Stealth Gao II, you will need to get the left and right Gaogaigar forearms from the Gx-68. This also means you won’t be able to display Stealth Gao I and II together.

The “upgraded” form of the King of Braves Gaogaigar. Following a crushing defeat at the hands of a new enemy, the 31 Machine Primevals, Gaogaigar is given an improved version of his Stealth Gao (Stealth Gao II), which greatly augments his offensive and defensive abilities, thanks to the new “Phantom Rings” parts, as well as added space travel and propulsion capabilities, courtesy of the new Ul-tech Engines.

Spare Gaogaigar Head – same as the earlier set, a spare head is included, the head features a “fully formed”, non-transforming Gaogaigar head so that the depth of the eyes are more show accurate. The version that comes with this set has exclusive, gold-plated helmet fins. It does require removing the default Gaigar head from the ball jointed neck though.

Likewise, the “maskless” faceplate from the original set is also included. Based on Star Gaogaigar’s final battle scene with the Z-Master, where his face mask is blown off (it’s a recurring theme in all Brave Series final battles). You will have to equip the non-transforming GGG head first though, as this won’t work with the default Gaigar head.

The Space Boosters’ nacelles are mounted on an internal ratcheted swing joint, so you can swing them to the sides for added visual effect.

Ul-tech Engine activation (requires manually swapping and replacing the cover parts on the nacelles from black to green).

I really love the pearlescent green plastic they used this time around (it was just regular clear green plastic on the old set). It’s really stunning to look at and it’s something I never thought I would see used on an SOC figure and it totally works. Ingenius!

Once you’ve got Star GGG all set up, I strongly recommend using the display base to hold him up. The Star Gaogaigar is very top heavy and while it can stand fine by itself without support, it’s safer to have him propped up by the base for long periods of display (remember to use the proper base attachment for his combined form) to avoid inicidents, particularly when you’re trying to pose the figure with his gear.

Thanks to the new Phantom Rings, Gaogaigar’s attack and defensive capabilities are vastly improved.

Both Phantom Rings are connected to the forearms via this clear optional attachment piece on the underside, creating the illusion that the ring is “floating” in mid-air on the forearm.

Same as the other set, the Driver has a spring-loaded gimmick that pops the blades open when you push down on the shaft.

Thankfully, this time around, the Gatling Driver doesn’t have connection problems, my previous version’s halves wouldn’t connect together properly.

To get this shot, you have to cheat a bit and raise the neck platform, otherwise, the head stays too buried in the torso to get a good visual shot.

The Gatling Driver uses Gaogaigar’s “Protect” arm to power its Dividing Core, which spirals space to a tight point to create two different effects, depending on how Guy will use it. The first effect creates a binding area of space that prevents anyone in it from moving. The second function creates a large blue “gravity lens” which can focus an attack to a tiny point to create greater damage.

Unlike the Dividing Driver, the Dividing Core within the Gatling Driver is not built to be fully discharged with each use, the spiraling function can use a varying amount of power and thus be usable multiple times. While the “gravity lens” drains the core of all power with one use.

An optional support piece is included if you wish to keep the Driver connected on the display over long periods of time, this will prevent GGG’s shoulder joint from wearing down or deforming.

Getting it into position is a real chore though.

The lion’s mane can be folded down to allow the arms to pose forward.

As of this writing, I have yet to receive my Gx-69R Goldy Marg to compliment this set, so I’ll hold off on having this set posed with a Goldion Hammer for now. 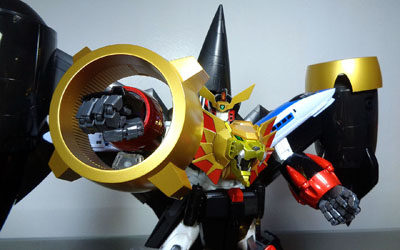 List of changes from the original Star Gaogaigar Option Set release
-Brighter shade of green on the box
-Star GGG’s head can be visibly seen on the new box as well.
-Clear plastic tray instead of styrofoam (why Bandai??)
-Smaller box dimension (by 1 inch) thanks to the lack of styrofoam tray.
-Gold-plated Phantom Rings
-Gold-plated helmet pieces on Gaogaigar
-Pearlescent finish on the green parts of the Stealth Gao II
-Green plastic used on display base (odd choice to leave the Goldion Hammer post still black though)
-Clear pieces such as the support strut for the left arm and clips for the Phantom Ring also now use green clear plastic

Sadly I couldn’t do proper comparison shots with the old set (I was scheduled for my Covid-19 vaccine shots that day). Ah well… perhaps down the road when I revisit this set some day, I’ll update the gallery.

-When propped on the display base, his height then reaches 15 inches.

-It also eats up a lot of real estate, he spans about 15 inches across

-Diecast parts in this set include:
–Ul-tech Engine frame

-Beautiful finish on the green pieces of the Ul-tech Engine.

-Adjustable angles on the boosters.

-Attaching the “rings” to the boosters seem easier this time around.

-The manual is a reprint of the original, no new pics showing the new green plastic display base shown in the manual.

-Nothing new has been added, aside from cosmetic changes.

The price I guess? This thing costs much more than the first release at their respective SRPs. That aside, no real quality control problems here this time around, thankfully (looks at the disconnected Gatling Driver from 1st release, shakes head).

Overall, the minor changes are a nice touch, I really like the green stand and the pearlescent shade of green added to the Ultech Engine clear parts. Price issues aside, this set is still a really impressive add-on for the Gx-68 and it’s a great “second chance” for folks who missed out on the first release, as that one reached crazy prices on the secondary markets almost immediately after they rolled it out.

With regards to the mixing of gold-plated parts (Phantom Rings) with the non-gold-plated ones (Galeon), the whole thing actually doesn’t bother me too much. I thought it could’ve, but seeing it in person, it doesn’t. Not too little, not too much. So just right.

If I had to choose one though, I think I would probably go for this set over the original, as the green display base and new pieces for the Ul-tech Engine really rock and the bright shiny gold parts make GGG have even more shelf presence than before.