Be careful not to lose this small Tomahawk connector piece.

The black and white instructions are on a separate sheet from the colored manual.

Interestingly, the box is made from a different grade of cardboard, not the usual kind used in the SOC line.

Set 19 years after humanity’s first contact with the alien invaders called the Andromeda Stellaration from the distant future, Professor Saotome begins work on a more stable Getter Energy-based robot to defend the human race from future attacks. The Getter Arc is the Earth’s best hope of stopping further incursions from the Andromeda Stellaration.

The undersides of the ship all have decent paint detail as well.

To attach the Getter Wings onto the figure, you will have to remove the cover plate on the Arc’s back first. Personally, I don’t get the point of the back cover, as the wings are always present. We never see the Arc without its wings deployed.

The final Getter created by Professor Saotome, the Getter Arc was made after the Institute lost Shin Getter (along with Ryoma Nagare, Go Ichimonji and Messiah Tahir) when it crashed on Mars (in order to save the Earth from further Getter Energy fallout at the end of the Shin Getter Saga) 10 years prior to the events of Getter Arc. It is piloted by Ryoma Nagare’s son, Takuma Nagare.

Alternate faces are included with the set. Take your pick between with and without eyeballs.

lol.. anybody else getting a “Muppets” vibe from this look?

Getter Crush! – Using its fanged maw and retractable talons, the Getter Arc can tear away at an enemy unit’s armor without using any of its other weapons.

Battle Shot Cutter! – The blades can expand up to lengths twice the size of the Getter Arc, allowing the Arc to cut through humongous targets bigger than itself with ease.

Interestingly, the Battle Shot Cutters are usually rolled up on the Arc’s forearms when not in use (which is most of the time). Unlike Shin Getter One, they’re not always deployed. It’s too bad Bandai didn’t include alternate forearms with this set. Ah well.

The tip of the Tomahawk handles need to be removed before they can be inserted into the fists.

Be mindful of the shape orientation of the ends before connecting.

Tomahawk Hurricane – Armed with the Tomahawks, the Getter Arc spins in place insanely fast, creating a green-colored Getter Ray covered vortex that sucks in and shreds its targets. The move is used only once in episode 5 of the Anime to take out the last “possessed” Getter D2.

Thunder Bomber! – the Getter Arc’s wings fold upwards and discharges incredible amounts of electrical energy over a vast area around itself. Destroying hordes of enemy units in one shot. First appeared in episode 5.

There are some joints in the backpack and wings that you need to manipulate first in order to get the Thunder Bomber positioned right.

In the final episode, the Thunder Bomber attack is shown to be able to be focused on a single target as well.

Arc Shine Bomber! – appearing in the Anime only and not in the Manga, similar to Getter Robo G’s “Shine Spark” attack. It first appeared in episode 11 and then again in the final battle. Interestingly, unlike the other Getters, Takuma can activate this attack all by himself, without Kamui or Baku in the other Getter Machines, as seen in the final episode. This attack usually requires all three pilots present to activate.

Catapult platforms for the Getter Machines.

Personally, I would’ve preferred getting a “vertically stacked” version of the Getter catapult/ launch deck, as that’s how it was in the Anime, it’s also a throwback to the classic Getter Robo G launch sequence.

The set comes with two different attachments for the Getter Arc, one of holding it in place on the display base in “static pose” and another for posing it in “flight mode”.

Proper placement of the clip attachment for holding Getter Arc.

-Mid foot articulation. A first for a SOC Getter.

-Moving thigh armor plates. These plates move downward when you lift the legs up past a certain level to allow high leg articulation. Clever.

-Lack of detailed sculpt on the soles of the feet? This sort of makes the figure lack traction when standing on surfaces. Be mindful of this when posing it on very polished surfaces.

-Colors of the Tomahawk seem too dull. They also don’t match the darker gray colors on the back of the box. Hmm…

-I can’t say I like the cut of the wrist joint. It stands out too much, it kind of reminds me of Revoltech joints. I think Bandai could’ve done better here.

Geez, the silver “ears”/ side horns on Arc’s head. These are actually just glued into place with very shallow connections. They get snagged and become undone very easily when you’re changing the face plates. Be careful not to lose them. I nearly lost both, twice, while doing this review. I eventually decided to glue them back in permanently with modeling glue.

Overall, not bad, but it feels like something is missing? While the figure is decent, it’s not going in my “top 30 SOC list” for sure. Maybe it’s the matte finish that’s throwing me off, or the lack of pearlescent white paint finish? The whole thing looks too plain, even in terms of sculpt work. Maybe I’ve been handling too many Fans Toys figures lately, but the paint finishes there, compared to here, are like night and day. The paint finish on this guy just feels sub-par for an SOC release. I actually wonder at times if Bandai outsourced this figure to another company?

I didn’t have time to break out the BU Toys Getter Arc for a side by side comparison, but that figure costs a bit less, had more added details (clear parts with good sculpt work underneath) and even had light up LEDs. Given the choice between the BU Toys or the SOC though, the SOC does look better and more toon accurate for the most part. The SOC also comes with the Getter Machines (the BU Toys doesn’t). So, I suppose if you’re looking to grab a Getter Arc, the SOC is still the way to go.

For the curious, here’s the link to the old BU Toys Getter Arc review. 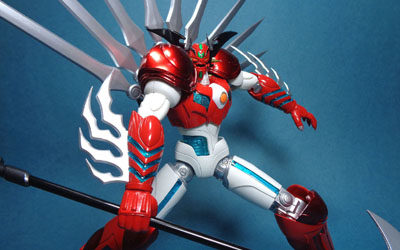 Funfact: Due to Getter series co-creator and main scribe Ken Ishikawa’s sudden passing due to heart failure in 2006, the story suddenly stopped short and the Manga was never given an ending. This is reflected in the Anime as well, but with an added post credits scene in the final episode that gives a glimpse of what happens a few years down the road (kinda).

Funfact 2: The Getter Saga in the Manga spans quite a long timeline (it’s different from the various Anime incarnations), starting from the original Getter Robo story up to the start of Getter Arc (time skips included), the main saga’s clock runs about 29 years or so. The saga timeline jumps even further when you factor the events that take place 750 years into Arc saga’s future timeline.

Funfact 3: At the end of Shin Getter Robo’s Manga story (which is a bit different from the “Armageddon” OVA), fallout from Getter Dragon’s cocoon formation that lead to its transformation into Getter Emperor resulted in a massive radiation surge that killed everyone in the Saotome Institute, including Michiru Saotome. Leaving Hayato and Ryoma as the only survivors as they were able to withstand the high levels of Getter radiation. Tragic.