Please take note of this paper pack on the back of the tray.

This paper pack holds his forearm blades. Terrible, terrible execution regarding placement of this accessory.

His beak can be opened and closed.

His blaster can be tabbed into a slot on his thighs or his wings.

Ever looking out for number one, Terrorsaur always schemes to benefit himself from any situation. Ambitious to become the next Predacon leader, he will even ally himself with the Maximals on occasion to achieve his goals.

The figure is a heavy retool of Airazor.

Since the figure uses Airazor’s body mold, Hasbro decided to add forearm blades to this figure for show accuracy, unfortunately, the blades are packed hidden behind the tray, so one might accidentally throw away the blades with the packaging if one isn’t looking.

Forearm blades. They were never used in the show though.

Due to the back-heavy nature of the figure, it can be a bit hard to stand properly at times, the wobbly ankle joints also make the whole problem worse.

Hmm… I never noticed the Predacon insignia was on his right arm in the show. You actually rarely make out the insignias on everybody, they weren’t as clear to spot as they were back in the G1 animation models.

For weapons, Terrorsaur only comes with his blaster. 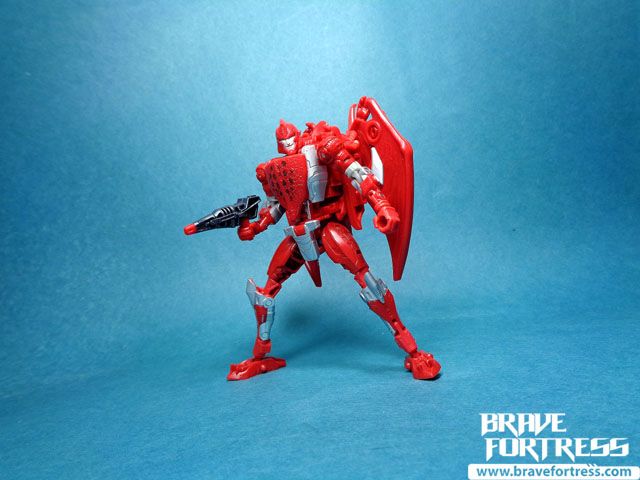 His weapon can be tabbed into his thigh in robot mode as well.

He comes with a Vok Golden Disc.

With the other side featuring “Sounds of the Earth” engraving.

Terrorsaur eventually meets his fate when the Vox’s planet buster weapon exploded and shorted out his hover platform, sending it crashing into Scorponok and the two fell into a pool of lava below their base.

Overall, a pretty good upgrade from the original toy. It’s not perfect and the Pterodactyl alt mode can be ridiculously overweight to look at from certain angles, but the robot mode looks great and it’s nice to see the classic Predacon team finally nearing completion with modern era tooling.

Hopefully we’ll get Inferno and Tarantulas soon so we can finally complete the original Predacons.