Thankfully, the manual is colored so there’s an added level of class as compared to the usual black and whites that come with mass retail Transformers toys.

Due to the instructions not showing how to correctly insert the planet onto the base (until the last page… sigh… ) a lot of people were very confused as to how to plug the sucker in. It involves untabbing this panel on the planet’s underside inward and then inserting the base arm. I find it easier to just flip the planet upside down and plug the base in.

I actually got this wrong at first, as you can see, the panel is sticking out, when it should be folded into the planet so it stays out of sight.

The right way (hidden inside the planet):

The neck of the base is held in place by this little piece. Make sure to NOT lose it.

A big part of me wishes there was some sort of plaque or something on the display base. C’mon with what Hasbro was charging for this, a plaque would’ve been a worthwhile bonus.

The spare faceplate and chin piece can be stored in a compartment underneath the base.

Make sure to plug the wings/ planet rings properly, there’s a proper design orientation in the slot to line the peg into.

The secondary display stand holds the Autobot Shuttle, Unicron’s head (optional, for when he’s in planet mode) and the Hot Rod and Galvatron mini figures.

It annoys me to no end that the lower teeth are not painted….

You can take apart his face plate to reveal some inner workings and his moving eyeballs.

The eyeballs are controlled by this lever on the back of his head. The concept is quite cool, but unfortunately, you can’t really clearly see his eyes are changing direction due to the opaqueness of his eye lenses.

Unicron comes with alternate “damaged” face to recreate his “floating” head look from the end of the movie and appearances in Season 3 of the TV series.

Lastly, you can also swap out his chin for the alternate “forked” design.

You really gotta love the details in the tooling on this figure. A whole lot of sculpt work went into this.

The big yellow spikes on the planet’s “equator” are made of soft, rubbery plastic. I hope they don’t degrade over time.

The planet’s mouth works on a gear system that’s really neat and lots of fun to mess with. The mandibles are articulated too! Too bad they’re aren’t connected together on a singular mechanism though. But it’s a lot of fun to tinker with regardless.

OK, as much as I love the detail work that went into this thing, the grey areas on the planet’s mouth are just soooo darn wrong!! Hasbro really should’ve painted this or at least included a sticker sheet to improve the look of this sucker.

Thankfully, Toyhax released this sticker sheet in order to cover up them grey areas on the planet’s mouth.

Attaching the stickers can be very trying and difficult, you can try folding the teeth down individually against the gear system to make things a bit easier. It took me about two hours to get it all done.

Yeah, really so much better.

You can also put the Autobot shuttle into the planet mouth. 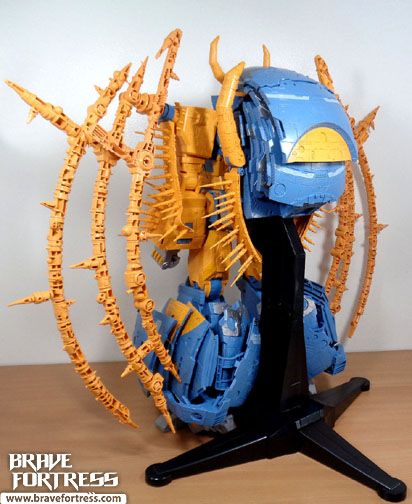 A monster planet of pure destruction, Unicron consumes all planets in his path! He travels across the universe in search of his next meal. His origins vary based on continuity. The one constant is that the Autobot Matrix of Leadership is the only thing that can stop him.

”For a time, I considered sparing your wretched little planet, Cybertron…

… But now, you shall witness …. it’s DISMEMBERMENT!”

You can put Galvatron firmly in between Unicron’s fingers to sort of recreate this scene from the movie. It’s impossible to do this angle 100% accurately though due to articulation limitations but this is close enough.

-Supposedly, Unicron weighs roughly over 19 pounds / 8.6 kilos (I wasn’t able to do an actual weight test, I don’t think my little weighing scale could handle it).

-In robot mode he measures roughly 36 x 27 x 22 inches in dimension (including the base tripod).

-In planet mode he measures roughly 44 x 33 x 27 inches in dimension (including the base tripod and mandibles).

Sigh… let’s face it, the bulky backpack is just a terrible, terrible sight to behold.

The connection for both the planet and robot modes to the display base are one and the same, the slot in Unicron’s… err. lower back side… lol…

The feet are on a STRONG ratcheted ankle, plus the toes and heel are also ratchet.

The toy features various hardpoints to plug blast effects parts from the various War for Cybertron Trilogy figures onto Unicron. lol… even on his crotch area??

The wings are really impressive to look at in robot mode.

The wings are actually connected at the shoulder in robot mode, they can even rotate.

Unicron’s head can look up thanks to a hinge joint on the base of the neck.

His hands feature 15 points of articulation. However, they’re all on a hinge joint system except for the thumb, so you can’t get him to spread out his fingers dynamically.

His shoulders are on hard ratchets as well and can even spread sideways.

Sigh… my unit came with a scuffed chest plate. The plate rubs up against a panel in planet mode. I wish Hasbro inserted some sort of cover for the chest. They included a piece of paper for the rear side where the arms and legs rub together.

lol.. you can even fit the Autobot Shuttle into his mouth!

Optional screw hole panel covers are included for the arms, you will have to plug them in one by one yourself though, after you remove them from the sprue tree.

When in robot mode, the “equator spikes” can be easily unplugged to give the robot mode a cleaner look.

While the figure can stand without the display base, it is highly recommended that you use the base. As even though the ratchets are insanely strong and tough, they still flex easily under the immense weight of the figure. So it just still takes only a little jiggle on a display shelf/ table to send this guy crashing down, even when he’s just doing a simple “A” stance pose.

Next to some of the other more recent Transformers figures.

BEYOND GOOD. BEYOND EVIL.
BEYOND YOUR WILDEST IMAGINATION.

Admittedly, Unicron can’t really look down. I had to cheat this photo a bit and unplug his head from the body to angle him right.

My extra Scourge figures hadn’t arrived yet at the time of this photoshoot, so no “Sweeps” yet included.

Overall, an insanely impressive piece!! It is huge and imposing! It catches your attention right away when you enter the room. Having it in hand, the original SRP makes it pretty well worth it (not the after market prices though). It’s not perfect, as it is mostly molded-color plastic with some sections missing much needed paint applications (the planet mouth and the teeth). I also wish it had some electronics to go with it, particularly audio clips from the movie.

There are some creative folks out there that managed to remove the planet panels and then create 3D printed extra parts to allow for the toy to be posed in both configurations at once. Pretty clever. I hope to be able to find a copy of those parts for myself.