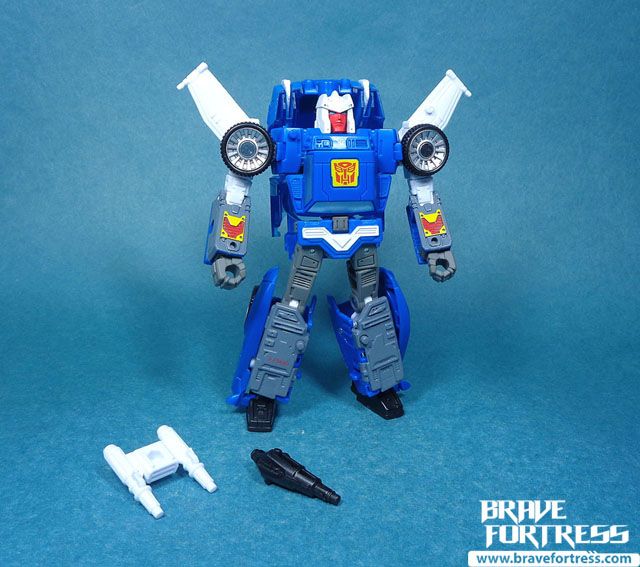 Incredibly vain but still heroic, Tracks is VERY focused on looking good all the time, even going as far as intentionally avoiding scuffing his beautiful paint finish in the heat of battle. As one of the few Autobots that has an alternate “flying vehicle” mode, Tracks narcissistically always thinks all the other Autobots are jealous of him and his good looks.

Sigh, when reviews said this guy had a lot of loose joints, they weren’t kidding, he tends to fall over a lot thanks to this poor QC issue.

Anther big QC fail here is that Track’s head is a bit too big to rotate fully left or right, due to the post for his backpack getting in the way. What the…?

Overall, a bit of a mess. While Tracks does capture his G1 look better than the previous Generations/ United toyline release, Hasbro really dropped the ball here in terms of quality control. The figure is very, very wobbly to the point that it’s difficult to stand sometimes, plus the head can’t rotate all the way unless you really force it. Easily one of the lesser TF Kingdom releases IMHO. What is it with Tracks that Has-Tak always somehow manages to screw up somehow? Even the MP Tracks wasn’t the best it could be. Sigh…