Based on Mazinger Z’s heavily-damaged look as he appeared at the end of the 1974 “Mazinger Z Vs. the Great General of Darkness” movie. Maz goes through the gauntlet fighting through several new, powerful enemies from the Mikene Empire and gets torn up pretty badly.

Even in this shape, Mazinger still retains all the articulation of the standard Gx-70 Dynamic Classics Mazinger Z.

Yeeashh… I wouldn’t want to see the repair bill for this mess.

Koji made a bad call here and fired his right Rocket Punch, resulting in it getting destroyed and him loosing a valuable right arm.

Like the rest of the Soul of Chogokin Dynamic Classics subline, Bandai included optional diecast skirt plate with a higher cut so you can move the legs up higher. But in this case, only the left leg hole has a higher cut.

Bandai also included in this set optional parts for Gx-73SP Great Mazinger, meant to recreate his “first appearance” look from the “Mazinger Z Vs. The Great General of Darkness movie”. Great Mazinger’s details were tweaked a bit later for his TV show.

Last, but not least, they also included Great Mazinger’s Mazinger Blades, colored the same as his first appearance in the movie.

Apologies, it was a really long day and I didn’t feel like digging for the Gx-73SP Great Mazinger to pair it up with this guy. Maybe I’ll come back this later on when I can.

Similar with the Gx-70D, this set is also missing the catapult for the Scrander.

As usual, I’m not really sure what to do with the arm attachments, as they can’t really plug into Mazinger when he has the Jet Scrander on. They can’t secure Mazinger like this.

The only way to properly secure Mazinger Z and make him “quake-proof” is to remove the Scrander and use the clip. 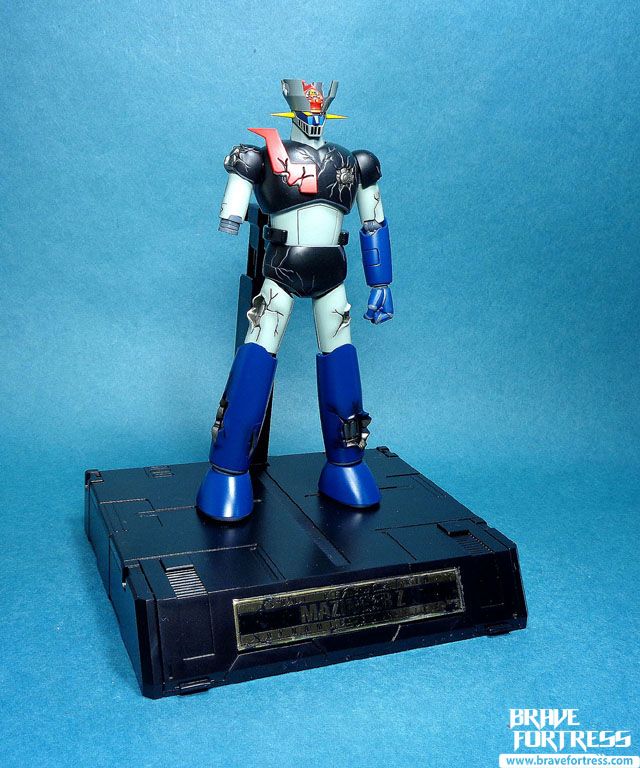 Comparison with the Gx-70SP Mazinger Z. Comparison with the Gx-70D Mazinger Z.

Extra pages were included in the Gx-70D brochure. 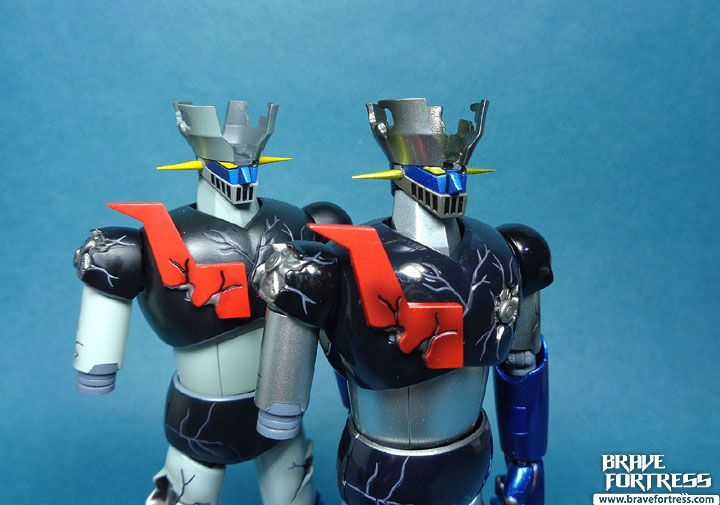 Interestingly, they didn’t paint weathering on the Gx-70SPD’s feet. Intentional or oversight? -Exceptionally captures every bit of battle damage Mazinger Z got from the “Mazinger Z vs. The Great General of Darkness” movie, same as with the Gx-70D.

-Added parts included to recreate how Great Mazinger appears in his film debut.

-Jet Pileder shows Koji inside. A welcome improvement over the “empty” pilot’s seat that came with the standard Gx-70SP, otherwise it would look really weird if the c0ckpit was still empty.

-“Smoked” weathering on the damaged parts more visible here than on the Gx-70D.


The Bad
-Nothing new added, essentially only a full redeco of the previously released Gx-70D.

-Missed weathering paint on the feet to match the Gx-70D .

-Colored brochure lacks extra info pages that were present on the Gx-70D.

No real problems or quality issues here, though it would be hard to tell, with all the “damage” all over the place.

Overall, not bad. But I have to say, for some reason, this set didn’t impress me the way the Gx-70D, Gx-70SP and Gx-73SP did when I opened them. Strangely, I’m actually more partial to the Gx-70D as my preferred “damaged look” Mazinger Z. I guess the original “non-Anime-accurate” look matches the damages better? It could be personal preference I guess. It also would’ve been nice if Bandai could’ve at least included the Iron Cutter forearms to make things more interesting. I can only recommend this if you’re all in for the Soul of Chogokin Dynamic Classics subline, or if you skipped the regular versions and are collecting only the SP versions (sub- subline?).