His accessories are packed underneathe his display base.

Ahh… the Great General of Darkness, when this figure was first revealed, fans were super excited, expecting it to be a diecast action figure. Unfortunately, this turned out to not only NOT have diecast metal, it had very limited points of articulation as well. Calling this a PVC statue with optional parts is a better fit.

Despite the lack of serious articulation, it’s not all bad. The figure comes with some shoulder and armpit articulation plus a hinge on the wrist joints. His head rests on a ball joint so he can look up and down. The figure does not have any joints from the waist down. 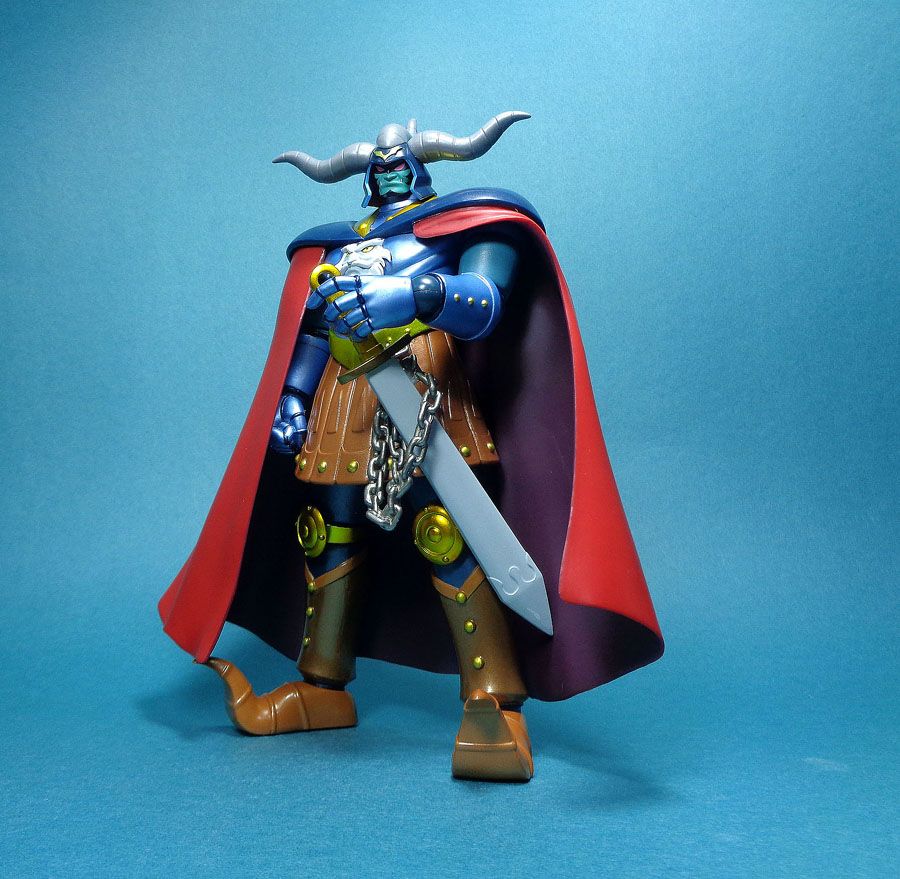 He lacks any elbow joints, so the only way to set his arm straight is to swap out the entire forearm.

Likewise, his fists can be swapped out to various optional pieces.

The chain for his sword comes in 2 variations. One version for when it’s closer to his hip, and one for posing the sword a bit farther away. I find the one that’s “closer to the hip” is more difficult to plug in for some reason. 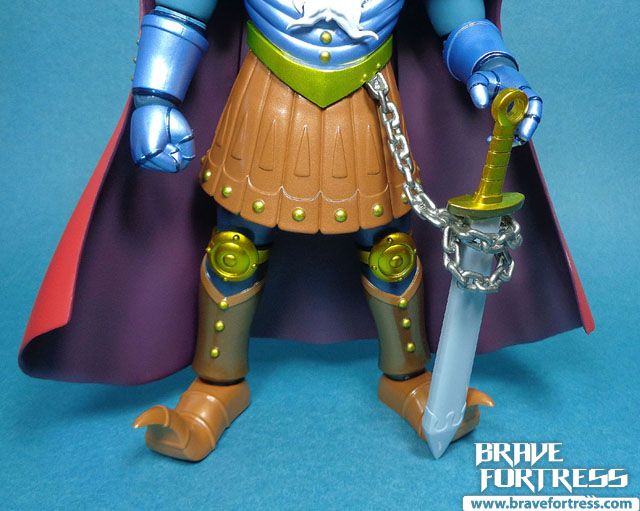 To get his hand to “hold” his sword, you have to take apart the sword handle first.

The figure also comes with optional cape parts. The cape parts are a little tricky to connect sometimes and I do worry that repeated swapping will result in the cape falling out too easily later on.

Last but not least, the set comes with optional Breast Fire heat sinks for Gx-70 DC Mazinger Z. The plates a little different from the standard version, featuring less curved angles when attached to Mazinger Z and painted a bit more metallic red. Not really that big an improvement IMHO. 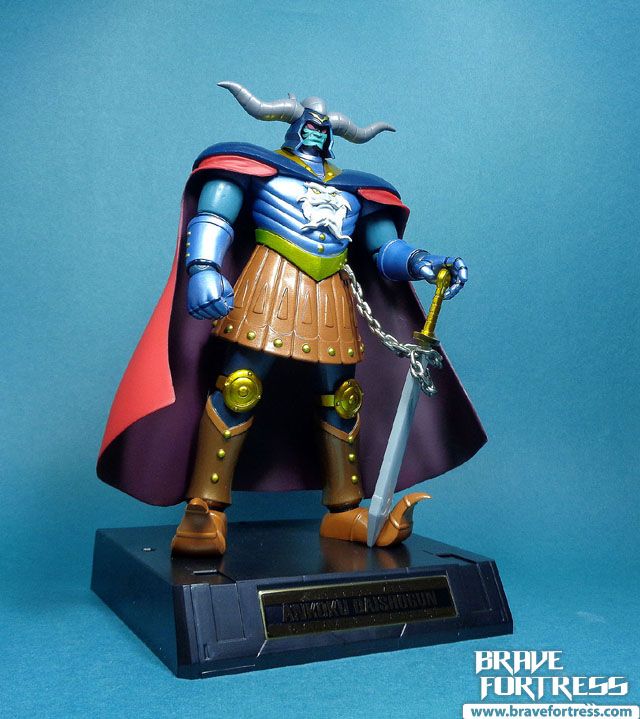 The General stands roughly 8 inches tall and weighs 319 Grams. This means he is heavier than Mazinger Z (257 Grams) and Great Mazinger (306 Grams).

For those curious (or too young to remember), this is how the original TV Great General of Darkness met his fate in the classic Great Mazinger series. It was cool, up until how the finishing blow was executed (Seriously?? That’s how he died??).

He was later replaced with a resurrected Doctor Hell (courtesy of the Emperor of Darkness). Doctor Hell became the Great Marshall of Hell. 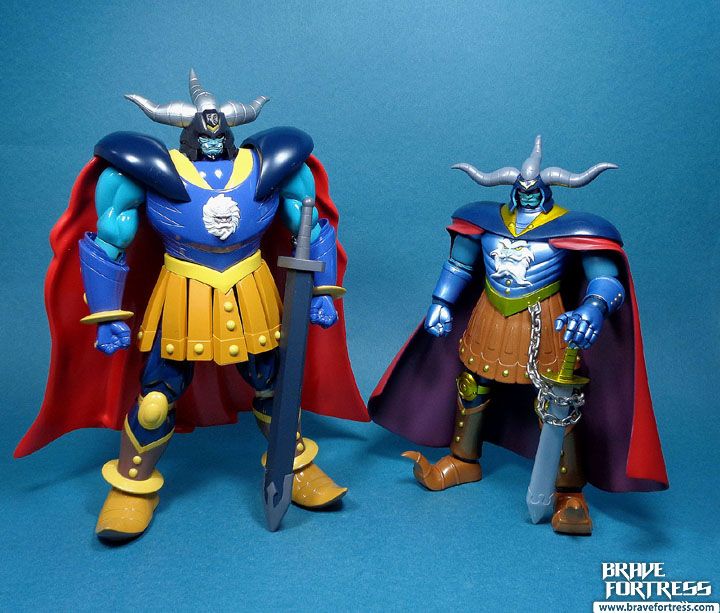 The Aoshima version is a straight repaint of the OVA design of the character, hence, it really isn’t quite show accurate (the block on his forehead alone sets the design apart already). It was limited to a “500 units production run only” thing back then. I managed to score the “China Backdoor (overproduced units?)” version later on, it came without the numbering sticker on the box and was missing the belt chain on his waist.

The Aoshima figure obviously outweighs the Figuarts Zero, since it comes loaded with diecast. On a side note, it seems that my General of Darkness Aoshima figures’ capes have started to become a little sticky. Anyone else encountering this issue? 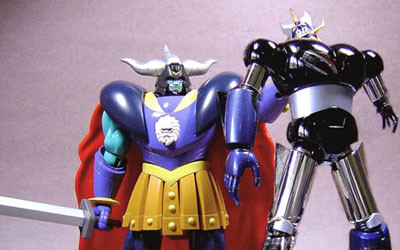 I didn’t have time to do a side by side comparison with the Zeus PVC figure (mail-away exclusive from the Shin Mazinger Blur Ray Boxset) , but Zeus is definitely taller ( Zeus is 10″ tall).

Here’s the gallery to the old Zeus PVC figure. 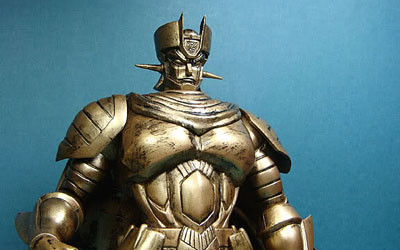 The classic-style art on the sides of the Dynamic Classics line up well. It’s a shame they didn’t stick to making them all uniformed in dimension. I guess foresight came up a bit short?

Funfact The Great General of Darkness was actually a warrior who fought with honor, even offering respect to his opponents . This won him fierce loyalty among his troops in the Mycenae Empire. This was a quality that was missing when Dr. Hell came back to life as the new general for the empire.

Funfact 2 Even though the Emperor of Darkness was the “big boss” behind the Mycenae Empire, he never personally led attacks on the Mazingers, always leaving the action to his generals, Great General of Darkness and later, Great Marshall of Hell. At the end of the Great Mazinger TV series, it is not revealed what became of the Emperor. He is the only survivor of the final battle after the Great Marshall of Hell is defeated by Mazinger Z and Great Mazinger.

Overall, it’s decent. No real quality control issues and it works really well with the SOC Dynamic Classics figures. I just wish it had more articulation and/or didn’t cost so much. Being a Tamashii Website Exclusive makes this figure already highly priced right out the gate. I can’t really recommend it unless you’re a big fan of Mazinger Z/ Great Mazinger.